No. 2 Mahnomen-Waubun began its defense of the Section 6A boys basketball championship with a 68-44 victory over No. 7 Park Christian in the north subsection quarterfinals Thursday, March 7 at Waubun high school.

The Thunderbirds have nearly an identical lineup and playing style to last year after losing only one senior out of the starting lineup.

“We’ve got the same kids back, basically,” head coach John Clark, Jr. said. “We’d like to be a lot prettier than we are but rugged is our style. Play defense, hustle and rebound and we’ve got to make some shots. Overall, our defense and effort was sky high.”

The Thunderbirds used that same style to defeat Hancock in last season’s 6A final and make a state tournament trip in the first year of the Mahnomen-Waubun athletic co-op.

Thursday night, Mahnomen-Waubun went for the sweep of Park Christian after entering the game having swept the regular season series from the Falcons.

Park Christian hung around in the first half but were hampered by turnovers that allowed the Thunderbirds to remain in the lead after trading buckets early in the game. Mahnomen-Waubun had trouble knocking down shots, something Clark, Jr. is stressing as a necessity for the playoff run.

“A lot of hustle and good defense,” said Clark, Jr. “We’re just leaving some points off the board and missing some easy shots. We have the energy there and our execution is good. We’ve just got to make shots.”

The Thunderbirds made enough shots to take a five-point cushion into the halftime break up 30-25.

Mahnomen-Waubun took command in the second half turning a close game into a blowout.

Allen Daugherty made the first field goal of the second half to pull Park Christian into a one possession game trailing 30-27. The Falcons got within three points once more on a pair of Jonah Williams free throws to cut the Mahnomen-Waubun lead to 32-29 with 15 minutes to play.

Jayden Heisler drained back-to-back threes to get the Thunderbirds on track offensively. Four minutes later the T-Birds led by 10 points at 42-32.

The Thunderbirds will face No. 3 Norman County East/Ulen-Hitterdal (17-10) after the Titans defeated No. 6 Pelican Rapids 71-56 in Twin Valley.

The north subsection semifinals are scheduled for Saturday, March 9 at Concordia College in Moorhead. Hillcrest and Henning play at 11 a.m.; NCE/UH and Mahnomen-Waubun follow at 12:45 p.m. A contingency plan is in place if weather forces the games to be moved. Perham high school is currently the backup location. 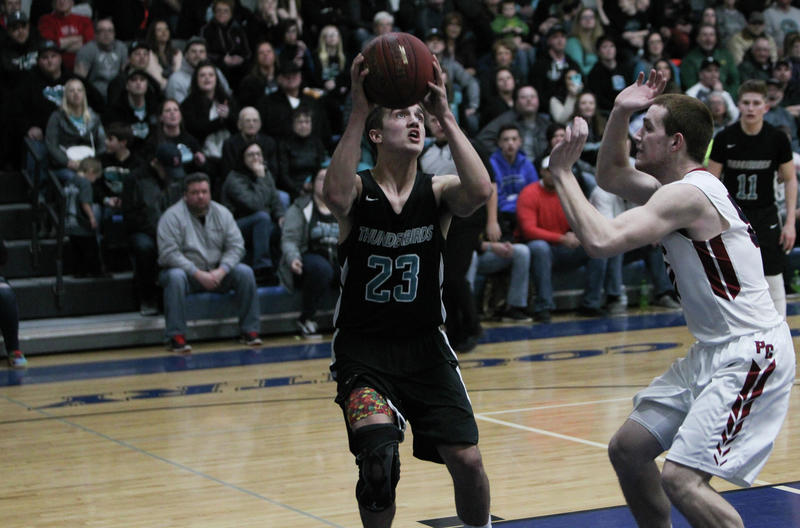