This year’s Youth Cheer Camp, hosted by the Mahnomen-Waubun Cheer Team in Ogema and Mahnomen, was a way to get kindergarten through fourth grade girls and boys involved in the sport and let them experience what being a cheerleader is about.

The girls and boys got to learn an eight-count dance, two cheers, and the school fight song. The groups were split up by grade, so they were easier to teach and all got together at the end to review as a whole group.

The participants also played games. As a warm up game, everyone played “ships and sailors.” Between practicing the dances and cheers they would play different games. Such as, Red Light Green Light, Simon Says, and others. Near the end of the day the little cheerleaders and big cheerleaders got to go outside on the playground.

On game day the big cheerleaders were at the gate welcoming the little cheerleaders walking through. Everyone had a look of glee and joy on their faces. As they came through they got a black ribbon tied in their hair to make a little bow and a pair of black pom poms for their performance at halftime.

Most of the little girls and boys liked the cheers the most and some of them liked the dances the most.

“I liked the cheer fire up. I like the motions to it,” said Pearl, a first grader at Ogema Elementary.

“I like the dances and the cheer touchdown the most,” said Janessa, also a first grader from Ogema Elementary.

On the other hand, the fourth graders liked the stunting the most. At half time on game night, they got to stunt in shoulder sits.

“It is a great opportunity to get younger girls and boys involved in cheer and to see what it is like,” said Cheer Coach Michelle Pariso. 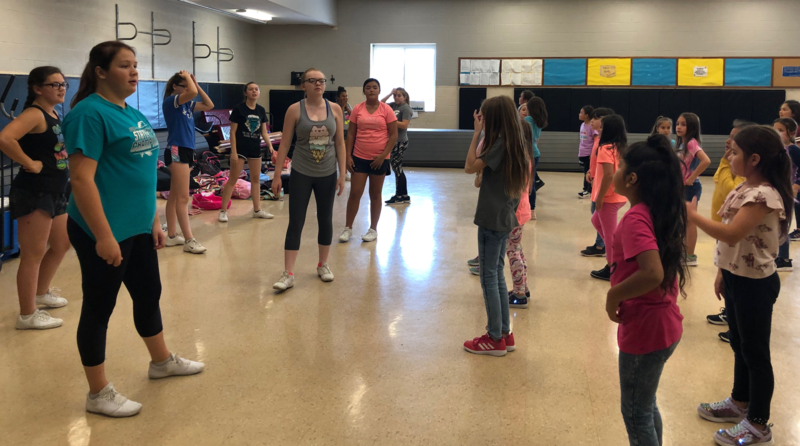